Prelude: What is Eifyr & Co's role in recent events?

They are the company that employed Hilen Tukoss after his departure at Zainou Biotech in YC 113; They also assisted him & his Arek'Jaalan project the construction of Site One & overseeing it after his disappearance.
When Hilen Tukoss returned, they were not contacted directly, but were happy to see him back. During these events a mysterious container was placed at Site One for the acquisition of Jove body parts for Hilen Tukoss. This objective was met, despite that later it turned out this Hilen Tukoss was a fake, a possible impersonation of him by the Drifters.
They were also interrogated by DED officials after suspicion that they had withheld an important broadcast by Hilen Tukoss regarding the Drifters.

Ever since Hilen Tukoss disappearance & later confirmed death, Eifur & Co managed the Arek'Jaalan HQ Site One and let it dormant for the most time. But with the arrival of the Seekers & Drifters, capsuleers have been pushing for a reactivation & expansion of the site as it was and still is the prime location containing information & research on the wormholes & Sleepers, who are probably related to the Seekers & Drifters.
The petition handed over by Dutchgunner is a formalization of these requests & some more that are seen to be important to the capsuleer scientific community.


The petition to Eifyr & Co & a visit to Site One

The Arek'Jaalan project has seen alot of activity as of late, with capsuleers across Eden assisting in various research projects to better understand the new discoveries made in wormhole systems & the nature of the Drifters.
Despite all this activity, the Arek'Jaalan capsuleers were unable to access Site One except for reading & downloading the archives. On top of this, Eifyr & Co don't seem to have an interest in expanding the facility to accommodate for the additional projects & discoveries made regarding wormhole systems & their inhabitants.

A petition was called for to address these issues formally, hoping Eifyr & Co would respond more positively to a rally to their station. This was deemed necessary as there's no official contact among Eifyr & Co regarding the Arek'Jaalan project.
The rally for the petition would occur on 8 august, 19H, announced by capsuleer Dutchgunner who also organized the memorial service for Hilen Tukoss. Scientific ships like scanner ships & Sister of Eve ships were preferred, but anyone who could come to support the rally was welcome. 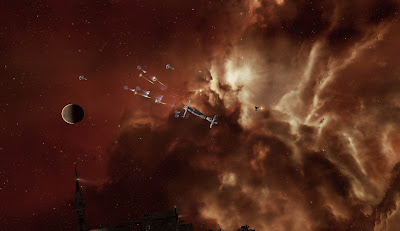 Science ships at the petition rally

The rally itself was a success, with over a dozen people in various science ships present, from covop frigates to the Nestor science battleship! Among the attendees was also a Sanctuary Stratios cruiser, a rare sight! With this support gathered outside the Eifyr & Co HQ station at Elgoi, the petition was published for anyone to read prior to the handover to officials.
The petition requests are as following:

1) To have the container that is currently anchored within Site One: Antiquus removed and analyzed. It was used by an entity that pretended to be Hilen Tukoss. I am aware that it is very unlikely that any clues to the origin of the container or the person who placed it can be found.  At the very least it will serve the purpose of removing a unneeded and unwelcome object.

2) To consider expanding the current facilities in Site One: Antiquus with a Caldari Research Outpost structure. The construction would be done in the same way as with the construction of Site One itself. The capsuleers will provide the needed materials and resources within a certain time.
An additional and useful expansion would be a construct that allows limited interaction with capsuleer ships. This would be in order to allow the unloading of gathered resources (such as from beyond wormholes).

4) To assign or appoint a contact from Eifyr and Co for matters strictly related to the operations of Site One: Antiquus and the research that is done there. This would be to communicate the needs for materials or supplies, in what quantities and also when it is needed.

5) To share more information on the will of the late Hilen Tukoss. This would provide some insight into how we can continue the Arek'Jalaan project on his behalf and in the way he intended it.

The petition broadcast was closed with the sentence Hnolai ki tuul, ti sei oni a tiu, a Napaani saying that translates into: Honored are the dead, for their legacy guides us.

These requests have been made in hope for a more smooth operation of Arek'Jaalan's Site One & a better cooperation with Eifyr & Co. They would also help in honoring Hilen Tukoss' legacy & continue his work.

Shortly after this announcement, the rally set course for Site One, just a jump away from the Eifyr & Co HQ. Originally meant as a visit to accentuate the importance of the site to the Arek'Jaalan project, it quickly turned into a new attempt to analyze the mysterious container placed for the entity that impersonated Hilen Tukoss to get the Jove bodyparts. Can't place a dozen scientists & their tools together without them analyzing something!

Data & Relic analyzers worked briefly on it, until access to the container was granted. After this they no longer locked on, combined with the system message that access has been authorized. This was already known, but never hurts to try again, to check for variables.
A temporary science lab for more intensive analysis was also set up by capsuleer Trii Seo, in order to acquire more secured information. While this was a partial success, the results will be investigated thoroughly before being released to the general audience.
On top of this, data gathering with the Entosis Link has also been attempted. Crystal Chantreuse was the brave capsuleer who volunteered for this, turning off all the safeties of her ship in order to maximize the potential for data gathering & response. However, the Entosis Link could not activate on the container or any other Site One installation.

The petition rally was a success, as most folks showed up with their science ships to support the initiative.
I personally hope for an expansion of Site One, in honor of Hilen Tukoss, so his legacy will have a visible component, honoring his work to unite capsuleers in a common science project.
A direct contact for the operation of Site One would also be more then welcome, to accommodate for future research projects & requests. This would vastly reduce the need for capsuleers to rally outside Eifyr & Co HQ every time a major event happens in regards to wormholes & associated places.

The analysis of the container was unplanned, yet inevitable when you gather a group of scientists with their tools around an object that is not fully understood.
More information could be gleamed off it if we could have full access to it as by petition's request, but for now, we'll have to do with what we can to unlock it's mysteries.
Posted by Jandice Ymladris at 09:56