About 3 years ago, Dr Hilen Tukoss ceased to replay to all communications and disappeared, causing the end of the Arek'Jaalan research project, specialized in wormhole system research.

But now he has returned, with a very interesting timing & announcement! Recently activity & interests in Wormhole systems & knowledge has been peaking, partly due to the unveiling of new, usable technology coming from those systems, culminating into the tech 3 destroyers!
Due to this, capsuleers had begun talking about the revival of Arek'Jaalan under their supervision, in order to be more prepared of any upcoming changes related to the wormhole systems and their inhabitants. In these tidings, Hilen Tukoss made an announcement, not only towards former Arek'jaalan members, but to all of New Eden's capsuleers about his return!

This has caused quite some commotion, not only due to the controversy that surrounded Arek'Jaalan in the past but also because of his odd message and his sudden appearance out of nowhere! On top of this, he also requested some hard to get parts.
The Republic research corporation Eifyr & Co are happy to see Hilen Tukoss return however, albeit they don't know either where the man has been all those years! Here is their public announcement: Eifyr & Co respond to Tukoss messaging.
We'll delve deeper into his messages, analyzing them and see what they could possibly mean.


The first message: It has been some >>time

His first message, announcing his return contains alot of cryptic messages, who have been decoded fast by expert cryptologists among capsuleers. An analysis of what various parts of the message means shall also be provided.
Here follows Dr Hilen Tukoss first message to capsuleers since his return & the analysis breakdown. As you can see it contains alot of oddities, strains of letters & numbers and an odd request. The decryption of the message was made possible by Valerie Valate and Esna Pitoojee who identified it as a hexadecimal code.

Looks like a standard broadcast opening, however under normal circumstances this is normally not included in most communication protocols.

Two dates, the 09/07/113 is the founding date for the Arek'Jaalan project. The second date is the date of his current announcement.

The first string of numbers refer to a location, more exactly the Eram system (database ID:30003413) where the HQ of Arek'Jaalan is situated, Site One (database ID:40216465)

The other line of code reads as follows:
syntax error, search="marriage"-synonym... result="matrimony"

Once more it's this odd searching for synonyms, as if Hilen Tukoss is no longer fully human, but partly integrated in a computer algorithm. However the following line does indicate a major claim in science breakthrough. The joining of Capsule & cloning allowed for the birth of the immortal ship captains known as capsuleers, causing a major change in the powerbalance of the galaxy.
Any scientific breakthrough that would even come close to this impact would cause a major turmoil across all of New Eden!
When the time comes, I will call for deposits of the following, to be made to site one, in order for me to continue work.
• Blood Drop
• Bone Splinter
• Cerebral Slice
• Epidermis Sliver
• Liver Bile
Your assistance in this matter would be very much appreciated. I will be in touch in the coming weeks to give further details.
- Hilen Tukoss
Quite a ghastly request one would say! Body Parts! But the body parts mentioned here are not just any body part, they're the remnants of a Jove who suffered a teleportation accident! While the poor Jovian has been reconstructed back in the end, there's still some these body parts left in the galaxy, held by capsuleers for research or just as a morbid relic.
But why would Hilen Tukoss need these Jovian body parts all of a sudden? One plausible theory is that he gathers it to gain access or otherwise interface with the Sleeper Mirror sites. However it remains speculation, and the true need to collect these parts is unknown.
7061636b6574206c6f7373202d20302e30313525636f6d6d656e63696e67204243412073687574646f776e2e2e2e20636f6d706c6574652173797374656d2073687574646f776e20696e69746961746564
>>
7472616e736d697373696f6e207465726d696e6174656421

All in all, the message contains quite some oddities. The opening & closing part can be attributed to malfunctioning communication relays or non-standard comm relays. However, the few code lines indicating an algorithm to search for synonyms are an indication there's more at hand. Coupled with the announcement that he's on the verge of a breakthrough that rivals the clone/capsule merging, it could indicate he managed to (partially?) integrate himself into a digital entity or a mainframe, allowing a next step into capsuleer/ship integration, or more.
While this sounds far fetched, it is possible, as the founder of Zainou Biotech managed to do this! While not yet repeated, various advances have made a breakthrough in this field more likely, among it the advances in capsuleer rebirth and the Dust Mercenary mind transfers. So in hindsight, the assumption that Hilen Tukoss is no longer fully human is not so far fetched anymore!

The second message focuses around Hilen Tikoss' request for the Jovian body parts, announcing that he has reserved a drop-off point at the Arek'Jaalan site in the Eram system. However, he refuses to share why he needs the Jovian body parts for, fueling the paranoia of many a capsuleer!
However, as with the first message, there's alot of code embedded in the message. However, two capsuleers have decoded these pieces most excellently! Thanks to Andreus Ixiris and Liam Antolliere for sharing their expertise!

31000005
Unidentified system. This is odd, as Tilen Hukoss mentioned colonized systems. Research indicates this ID is part of a series of missing ID numbers for wormhole systems. Currently more details are unavailable, but it is very much possible that another non-capsuleer organisation has secretly colonized a wormhole system of its own & kept it hidden from the rest of New Eden.

Looks like Hilen Tukoss message got interrupted by a third party, perhaps the organisation of the unknown colonized wormhole? After all, to be able to colonize a  wormhole system without anyone knowing, you need some serious backing & power to keep it all below the radar....

While people bickered & argued over the messages and warned for caution in delivering the body parts, due to the strange messaging format and the non-disclosure about the purpose of these body parts, some folks went ahead and just delivered the goods, curious to what it'll all lead towards.

It's important to notice that caution is advised, as something is clearly amiss, considering the strange errors in the message and the abrupt termination of the second message. Then again, the person was rightfully identified as Hilen Tukoss, so the question is not if it is a fraud or spy, but what he had become...

But as of now, this discussion has lost his relevance towards delivering the body parts or not, as rumour has it that several entities did not wait for any form of conclusion and just went ahead and assisted Dr Hilen Tukoss in his search for the body parts. 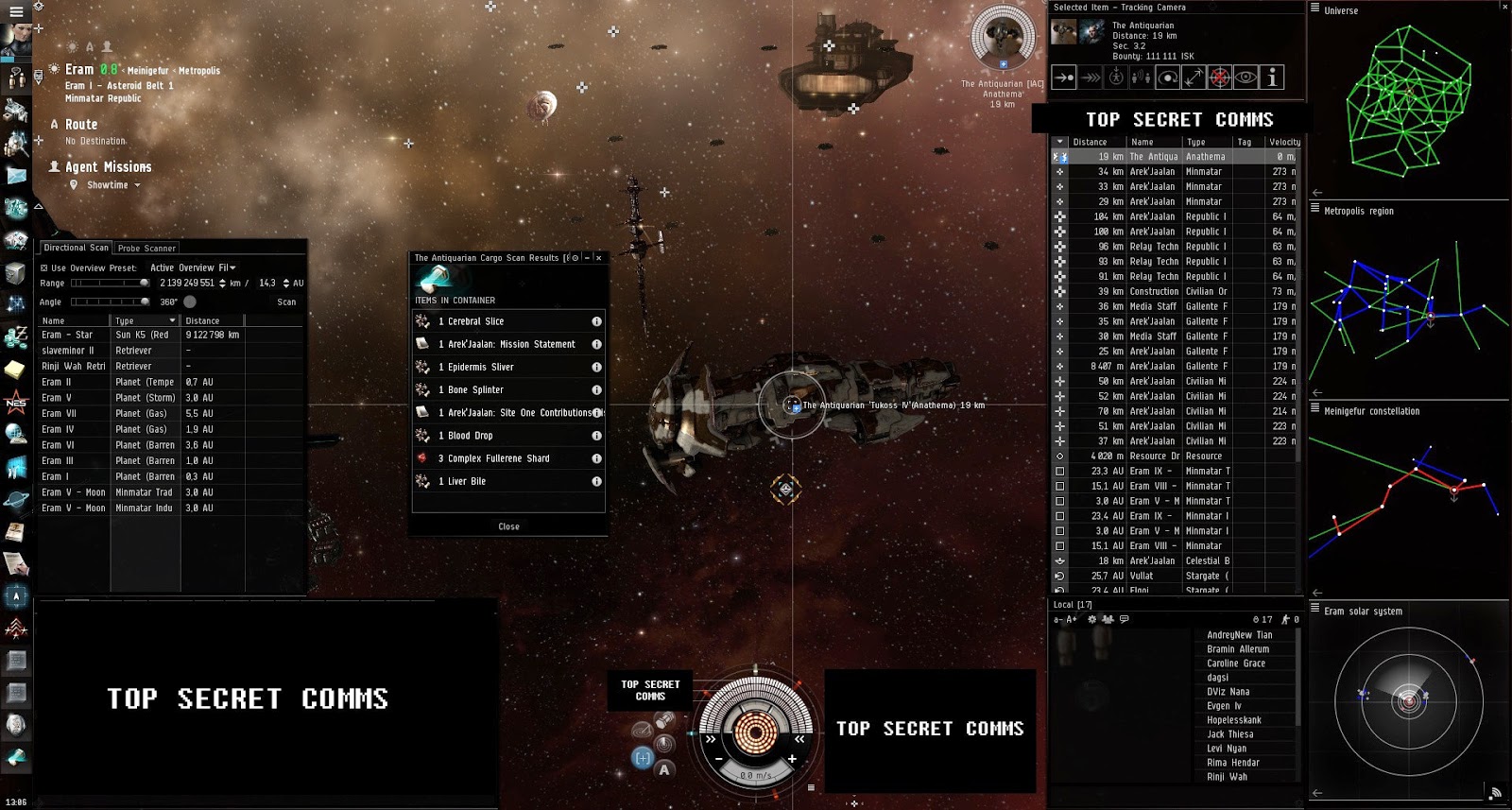 While the Antiquarian has been seen delivering the requested parts, it's doubtful he's the only one who delivered them. A few others have informed they would do the delivery once they had acquired the items.
While the Jovian body parts are not easy to find, they're still fairly common among collectors. They often accumulated several body parts and hence could be persuaded to hand them over for the right price.

Now that the body parts have been delivered, we can only wait for the next announcement of Hilen Tukoss and what the result of this support to his cause will be. Hopefully it will be a positive contribution. Aurora News will keep you informed on any future developments!

A new message has been broadcasted by Hilen Tukoss! But this third message is very different from these two and carries a much darker message! Read all about it : The return of Dr Hilen Tukoss, Part II: A third message!
Posted by Jandice Ymladris at 15:26