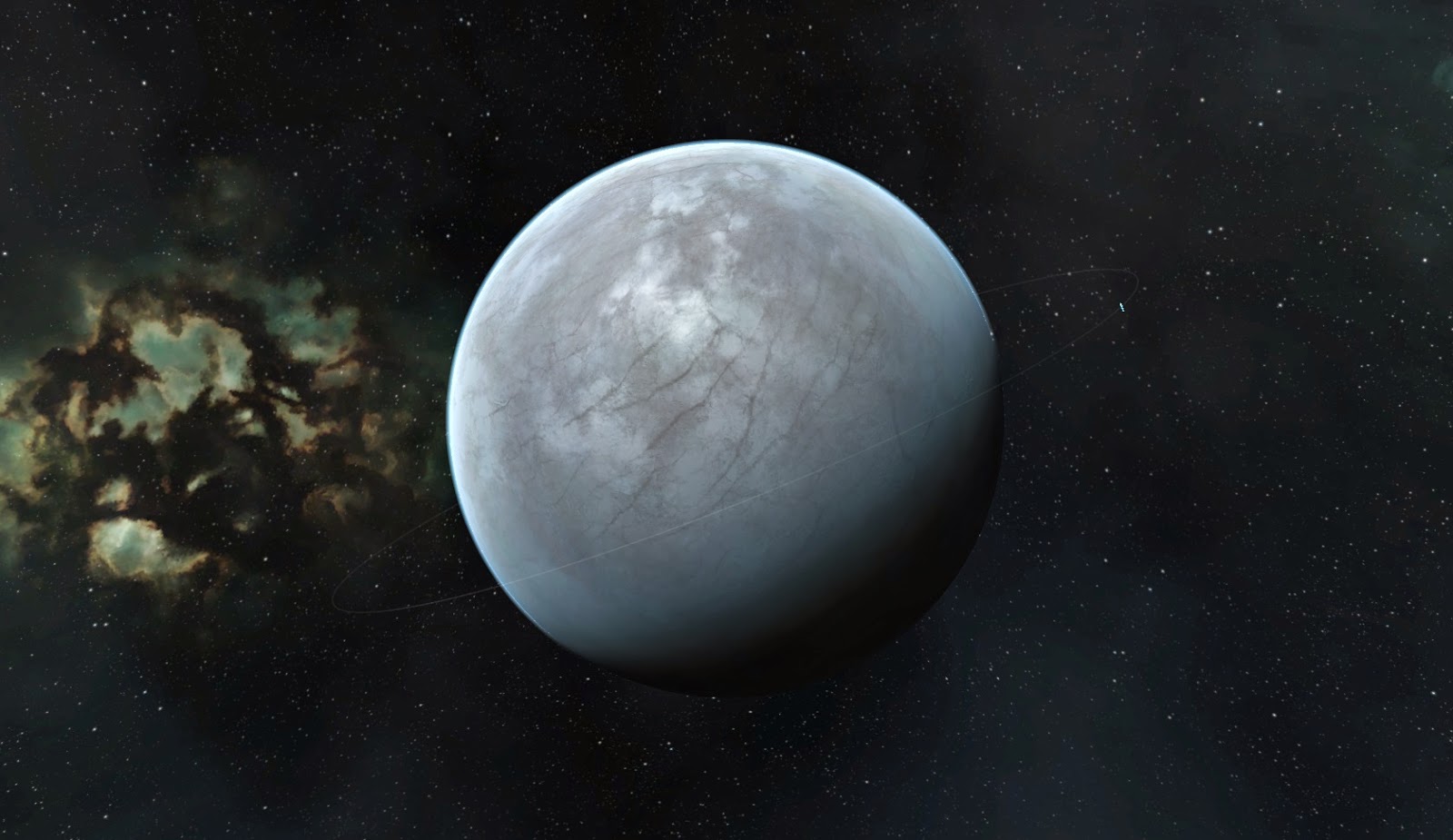 The iceworld Tsuruma VIII, location of the colony in distress

With those words, an call for assistance shattered the silence in various channels. A colony in the remote Tsuruma system suffered a major reactor failure, threatening to erase the colony in a blazing thermonuclear explosion! Initially, a Charon freighter was sent to assist, but suffered a critical engine failure & crashed on the planet, causing them to seek outward help! Top top it all off, debris from the freighter had struck the colony, worsening their situation!

As the colony was Ishukone-Raata property, I-RED member Korsavius was quick on the premises, overseeing the deployment of several emergency low orbital structures to assist in a rapid evacuation & extraction of assets & personnel. At the same time, he co-ordinated the arriving capsuleers, assuring their assistance to help out was used to it's maximum potential. This was needed, as the lives of 145.000 people was on the line! It would be a race against time to save as many as they could!
Morwen Lagann was crucial in the early parts of this operation, as her ship was a Stratios, equipped to deal with rescue operations!

As more & more capsuleers arrived, the evacuation of assets & colonists went into full swing! During this part, wounded colonists were evacuated first, as they required medical assistance. The various deployed medical facilities were a great help in this.
The arrival of Lt. Samira Kernher with a transport loaded with medical supplies, water & planetary shuttles made a great difference for the workload of many of the personnel working hard to follow the commands of their capsuleer overlords.
Ground comms with the colony kept everyone in the loop, despite static interrupting it at times, attributed to an encroaching ice-storm in the area! This forced the assisting capsuleers to accelerate their evacuation, as the storm would make it impossible to reach the colony once it arrived.

With the arrival of several more transports, the evacuation now picked up speed! Over 120.000 people still required evacuation before the storm arrived or the reactor collapsed, whatever happened first.
However, capsuleer Utari Onzo offered a way to push back the reactor failure long enough. While his combatship was unfit to assist directly, his engineer crew would go down to the planet, attempting to stabilize the situation long enough till the storm arrived.

As the engineers went planetside, the logistics in space expanded. As the Tsuruma system lacked the presence of a station, a ferry service was set up between the Onnamon system & the Emergency coordination center in space. This assured that the evacuation could keep going smooth, sending people & assets from the failing colony to the emergency facilities in orbit. From there, a transport would pick them up & move them to the I-RED offices aboard the station in Onnamon.

During this, it was noted that I-RED had prioritized certain colonial assets for evacuation, leaving behind people in favor of this cargo. While it caused some remarks from the assistance, the capsuleers understood that at this point any arguing would only cause the evacuation to slow down, making matters worse for those still left behind planetside!

During this, Lunarisse Aspenstar arrived, bringing with her a large contingent of shuttles! This pleasant surprise assisted greatly in speeding up the colonial evacuation.
However, a few incidents put a dent in the evacuation. One of the assisting capsuleers, Lyn Farel reported issues with handling a group of handcuffed people, forcing I-RED officials to sent additional security to assist her.
On top of this, two shuttles collided during the chaos of the evacuation, causing the loss of dozens of lives & a debris-field, making it harder for the remaining shuttles to maneuver! To avoid further incidents, Korsavius ordered the assisting capsuleer ships to space out more, allowing more room for the evacuation shuttles to fly.
The timely arrival of capsuleer Marrano Cardosa helped greatly in the coordination of the shuttle flightpads, as his Falcon made for an excellent emergency co-ordination platform.


Storm on the rise!

But the ice storm was still on the approach.... putting great pressure on the shuttle pilots & capsuleers alike to hasten their evacuation... During this, a planetary I-RED official broadcasted publicly that 'assets have been successfully evacuated & that there's more room for people on the transports'; This note sparked a few comments from capsuleers, questioning I-RED's priorities, but it was left at that due to the scarce time limit imposed by the encroaching storm!
The engineers who were deployed planetside did report they successfully delayed the reactor failure, but required their full attention to keep it stable enough to last...

Despite the increased speed & volume of the evacuation, it still went too slow... and the storm has reached the outskirts of the colony, forcing the evacuation shuttles to fly slower...
At this point, Foley Aberas Jones announced his intent to deploy dropships. While these ships are far less suited for civilian transport, their sturdy structure would allow them to fly through atmospheric conditions that would rip the weaker shuttles apart! 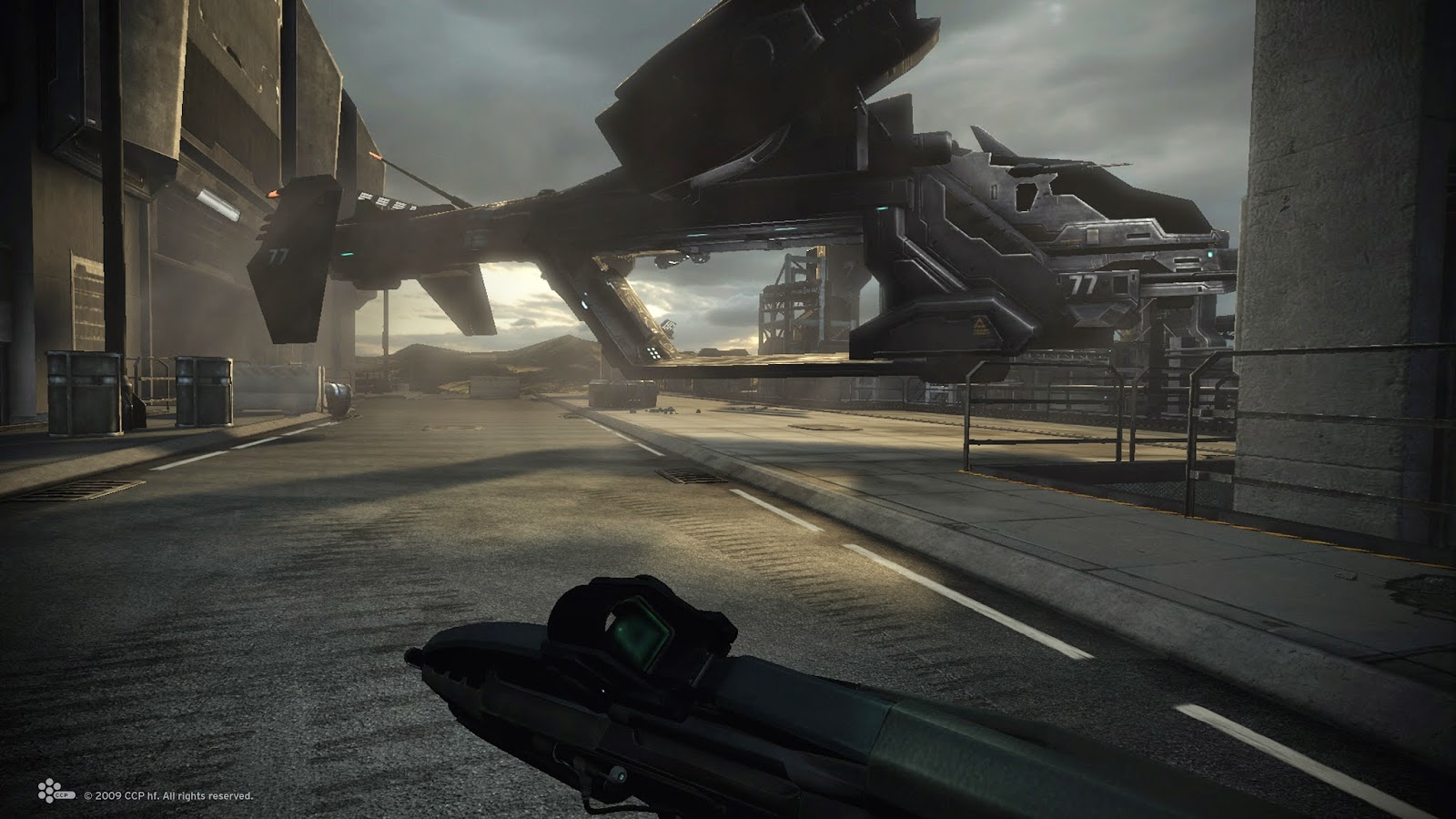 Landed Caldari dropship, no comfort, but it gets the job done!

As the storm raged, less & less shuttles were able to extract people form the ground. But thanks to the supplied dropships, the evacuation could go on longer then planned!
During this, two shuttles got caught in the storm! Upon hearing this, capsuleer Alexa de'Crux left orbit, diving into the atmosphere, ignoring direct commands from the co-ordinators to resume her task!
But as she re-emerged, people noticed her stunt worked! By disturbing the storm with her transport, she managed to assist the shuttles in breaking free from the storm, nearly at the cost of her own ship!

As people watched Alexa's stunt, a disturbing emergency broadcast emerged. The reactor was reaching critical status! No more time left!
In a desperate turn of events, all available dropships were ordered to commence a rocket-powered high speed drop, in order to retrieve as many people as they could before the reactor detonated!
Despite the heavy weather, the durable dropships managed to execute this dangerous maneuver without incident.

Shortly after this reckless dropship maneuver & Alexa's stunt, a blazing explosion lit the planetary surface, marking what was once the location of the unfortunate colony...
In assessing the situation, more tragic news arrived, at least 6 shuttles failed to lift off on time & got caught in the blast. On top of it, the engineer team provided by Utari Onzo had perished as well, staying on their post as long as they could in an attempt to stave off the inevitable explosion for as long as they could.

But the time for mourning wasn't long! A few scattered signals were found, indicating a few pockets of survivors still. Either through the use of an emergency evacuation service or by shelters did these lucky people made it!
With the storm still raging and the hazards of the reactor fallout, these last people were retrieved by the returning dropships, finalizing the evacuation of the colony.
Tsuruma VIII was once more a lifeless world of ice, a frozen tomb for those who didn't make it...

Of the initial 145.000 colonists, roughly 4.000 had perished in the disaster. A terrible tragedy, but it's thanks to the fast response of capsuleer ships that it hasn't been greater.
The deployment of emergency low orbital facilities, combined with the continued influx of additional shuttles for planetary evacuation helped in constantly speeding up the evacuation process. The addition of dropships allowed for an extension of the evacuation window, as these ships could fly through stormy weather.
The ultimate sacrifice brought by Utari Onzo's engineering team also bought enough time to rescue additional people.

Edit: Derived from the released I-RED investigation report: Total loss of human life is 4.720 people, of those, 3.968 dies as they couldn't be evacuated on time, 148 died in the shuttle-collisions during the evacuation. 58 died after evacuation due to their injuries being too severe.
The last tally of 546 deceased people is the part of the crew that didn't survive the crash of their Charon freighter. 438 crewmembers did manage to survive & have been retrieved.

One can criticize I-RED for prioritizing certain assets above people during the evacuation. While this does carry weight, the colony in the end was an I-RED investment, and thereby they carry the last word in who & what should be saved.
Hopefully I-RED management will be able to share more details in their decision in a future announcement.
The lack of protests of capsuleers when they caught wind of this prioritizing assets above people is commendable. While people can argue that it is inhuman to save assets rather then people, such arguments should be done after, not during an evacuation, as such discussions would only slow down the operation, endangering even more lives unnecessary.

All in all, thanks to the rapid response by capsuleers & their deployment of various assets, alot of people have been saved today!

I-RED released their investigation report regarding the incident of the destruction of the colony due to a faulty reactor & the failure of the Charon freighter to assist due to engine trouble, causing it to crash on the planet & worsen the situation.
It also lists the exact number of casualties & the cause of the loss of these lives.
The report also concluded that the destruction wrought by the reactor explosion was near total: 97% of the colony is flattened, with a few remaining structures too heavily damaged to rebuilt.

However, analysis of secured footage & the Charon's recorder revealed that malicious intent was at play, unknown persons sabotaged the colony,motives not yet revealed.
While investigation are still ongoing to identify the saboteur, I-RED has made clear the culprit will be punished 'to the fullest extent of the law'

It's also been revealed that a memorial service will be held at a later date, to remember & honour the people that lost their lives in this disaster.
Posted by Jandice Ymladris at 18:40