The 5th Burning of Jita 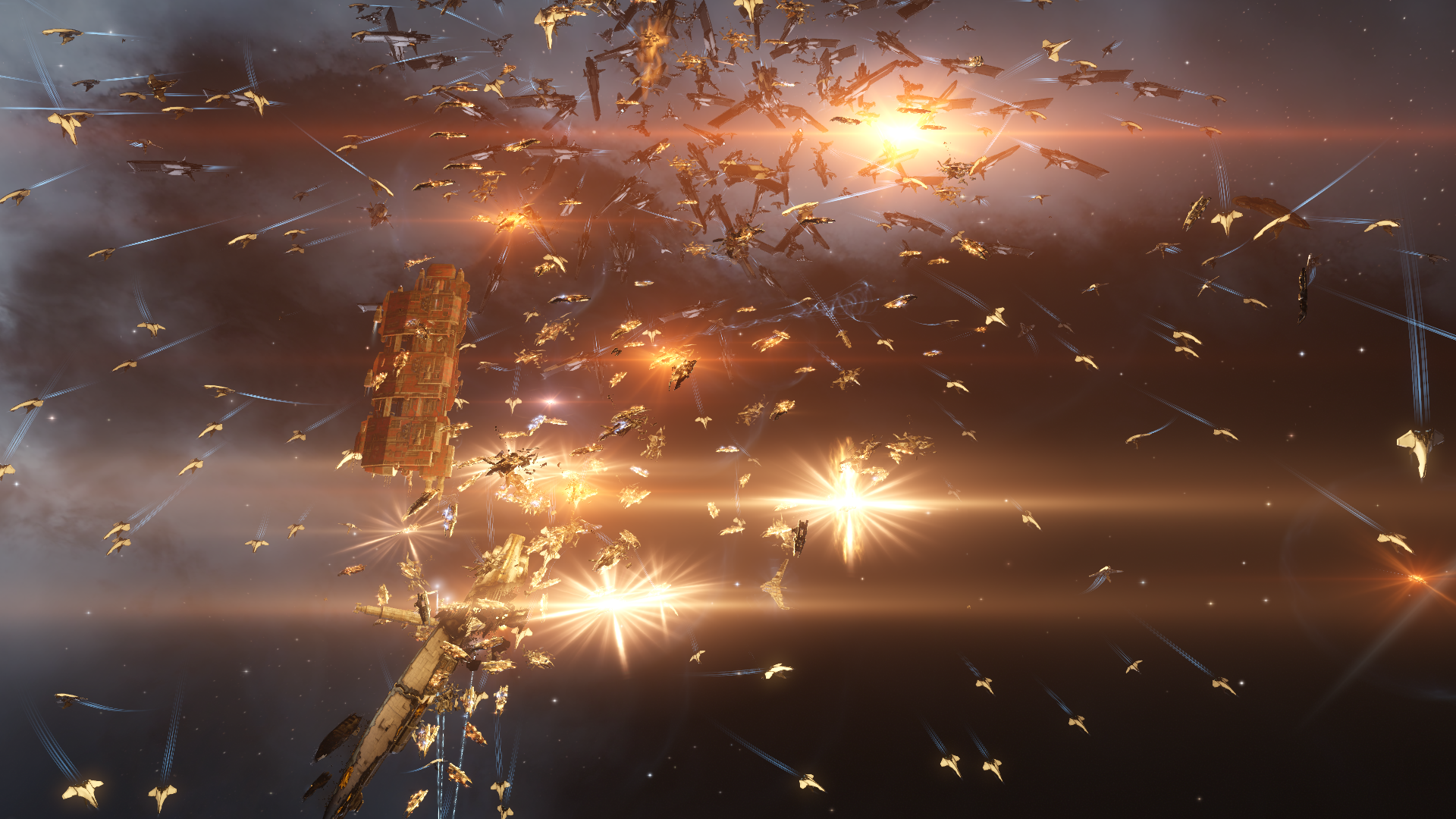 Their primary targets in this destructive endeavor were mainly the transport ships, albeit smaller subgroups have been spotted to aim for different targets. Adding to this, they operated beyond the Jita system as well, joined by various associates, destroying ships along important shipping-lane systems,  spreading the destruction & reach of this 'Burn Jita' ganking operation. 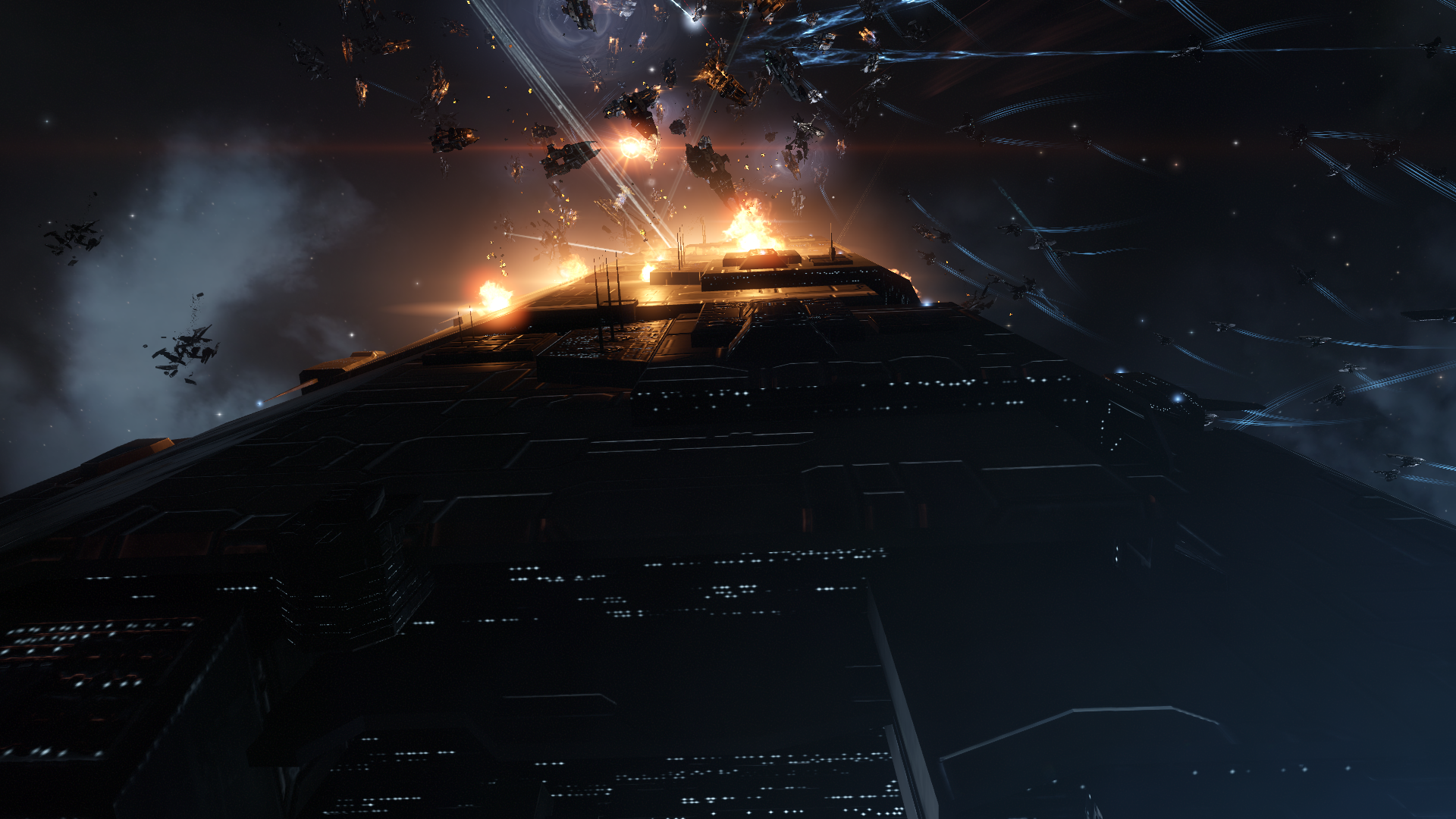 A massive Charon freighter burning under the Goonswarm Rage with CONCORD attempting to save the day, but too little too late.
Image by Whisper Quietly

This apocalyptic operation lasted 3 days, from the 2nd of March till the 4th of March; with only a small forewarning.
One would think that this Goonswarm Federation attack on the heart of capsuleer economic might would disrupt trading fiercely, but this is not the case.
Due to the repeat nature of the event & knowing from past 'Burn Jita' and similar occurrences, smarter capsuleers knew what to expect & prepared accordingly, often shipping goods & ships in advance to the proper regions, ready to make the big isk when the destructive operation kicked off. And did it pay off? It sure did, many raked in billions as the less fortunate & the less prepared got caught in this depravity of chaos & mayhem.

Indeed, many still got caught in this orgy of wanton destruction, often losing expensive ships, cargo & even their implant capsules! Many freighters got demolished, but even the tankier Orcas couldn't escape destruction during this event.
And all that has to be replaced... All those ships destroyed, all that cargo gone, all those implants, they have to be replenished to keep the trade going and keep the economy pumping. And through this, the 'Burn Jita' operation fuels the economy in a dark way, allowing capsuleers to make large profits as people died en masse in fiery ship explosions.
So in the end, prepared traders profited off those who didn't prepare for the inevitable upcoming 'Burn Jita' mayhem. 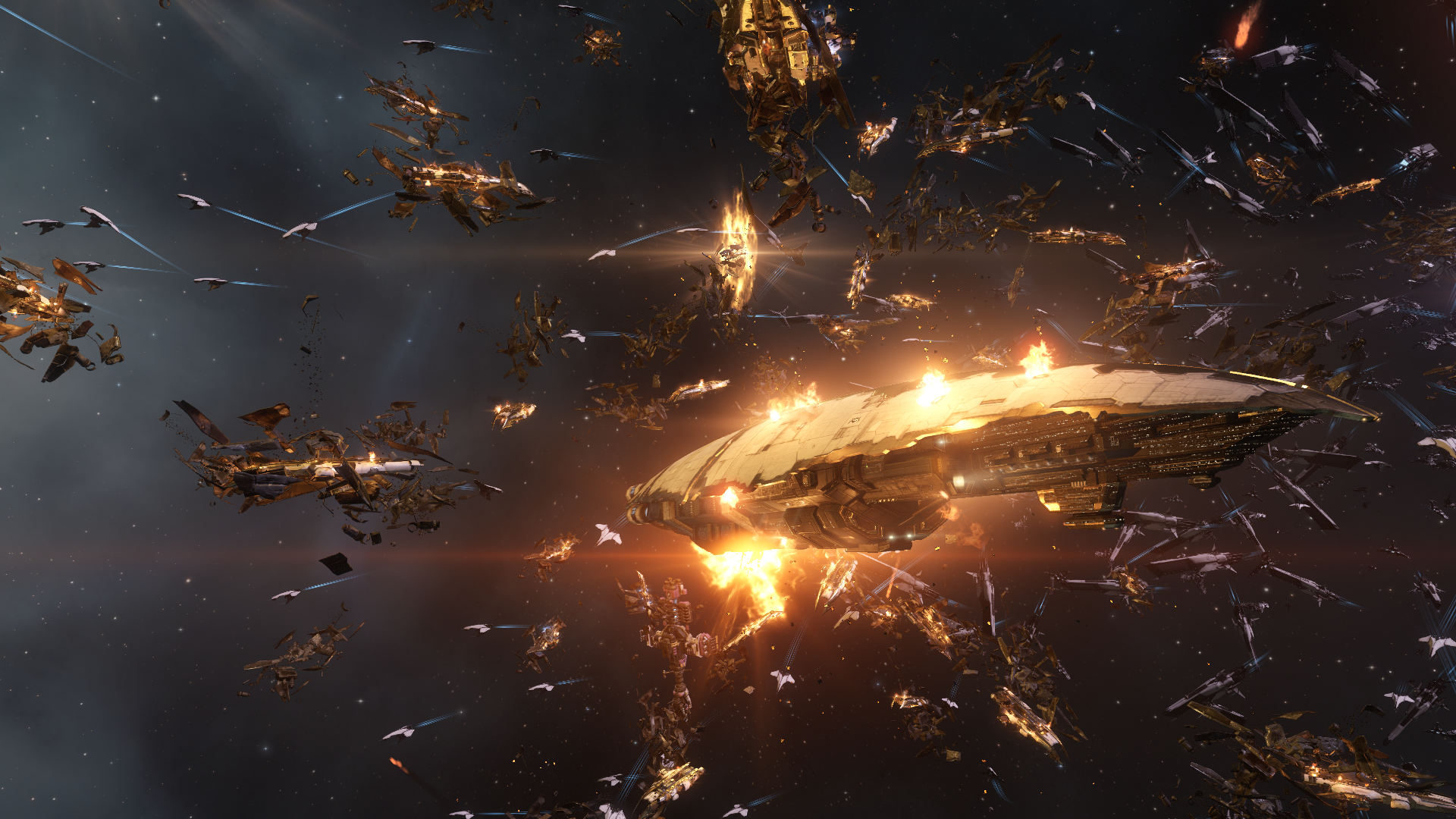 The final moments of a Providence Freighter
Image by Whisper Quietly

The tools of destruction

But what kind of ships were used to cause all this chaos? Unsurprisingly, the mainstay of the ganker fleets were destroyers and attack battlecruisers as these dish out the biggest punch for the lowest cost, able to mount powerful weaponry on a comparable cheap platform.
The main ship used did cause some frowns among the capsuleer community, as the destroyer of choice was the Amarr designed Coercer and not the ganker's favorite, the Catalyst.
Below is a list of the most commonly used ganking ships during this operation along with a link to their standard 'Burn Jita' fits:

- The Coercer destroyer: The mainstay of the Burn Jita fleet, packing a cheap but powerful punch through lasers. If you check out the fit, you notice it has been kept economic, with cheap tech 1 modules; relying on quantity to blow up things, assuring anyone can fly these ships in a matter of days.
Do note that a select group of Coercers were better equipped, using tech 2 laserguns to wreck haulers, but these ships were a rare sight compared to the mass of cheap tech 1 fitted coercers laying waste to Jita shipping & the surrounding tradelane systems.

- The Talos attack battlecruisers: A powerful Gallente battlecruiser fielding destructive short range blasters, for when some extra punch was needed. Notice that these ships are much better equipped, fielding high quality tech 2 modules, giving them that more of a punch. Thereby these were reserved for the elite pilots who do have the necessary skills to fly these punchers.
This ship was less fielded, but still figured on many a killmail during the 'Burn Jita' operation.

- The Purifier stealthbomber: An odd choice for a ganker ship, yet featured in quite some killmails. The cost to operate these specialized ships compared to their damage output normally would make it an unpopular choice for ganking, as such ship would be lost to CONCORD after attacking single target. But this was no normal ganking operation!
These ships often managed to outdo the Coercers in damage when they were involved, showcasing that this choice wasn't so out of place after all.

- The Trasher destroyer: This ship was far less used by the main 'Burn Jita' force, but it was a favorite of a smaller offshoot fleet, focusing on targeting smaller ships & capsules to blow up.
It still used cheap modules to take down targets, keeping down costs, outside the high quality ammo that is used. Yet the limited ammo requirement still meant that costs were kept in check.

The above 4 ships were most commonly used during the operation, but a few more ships have been employed as well, just in much smaller numbers & hence unsure if their fits follow a set standard:

The Catalyst destroyer:  The gankers favorite ship, it is cheap and packs a powerful punch with its blasters. Yet it was severely under-represented during 'Burn Jita'.
However, the few that did fly were equipped with quality tech 2 modules, giving them that extra punch when dishing out the pain.

The Hound stealthbomber: Less used then the Purifier, but it does dish out a good punch as well. Still an out of place choice for a ganking ship, but it served the role nonetheless, being involved in the destruction of many freighters and other large hauler ships. 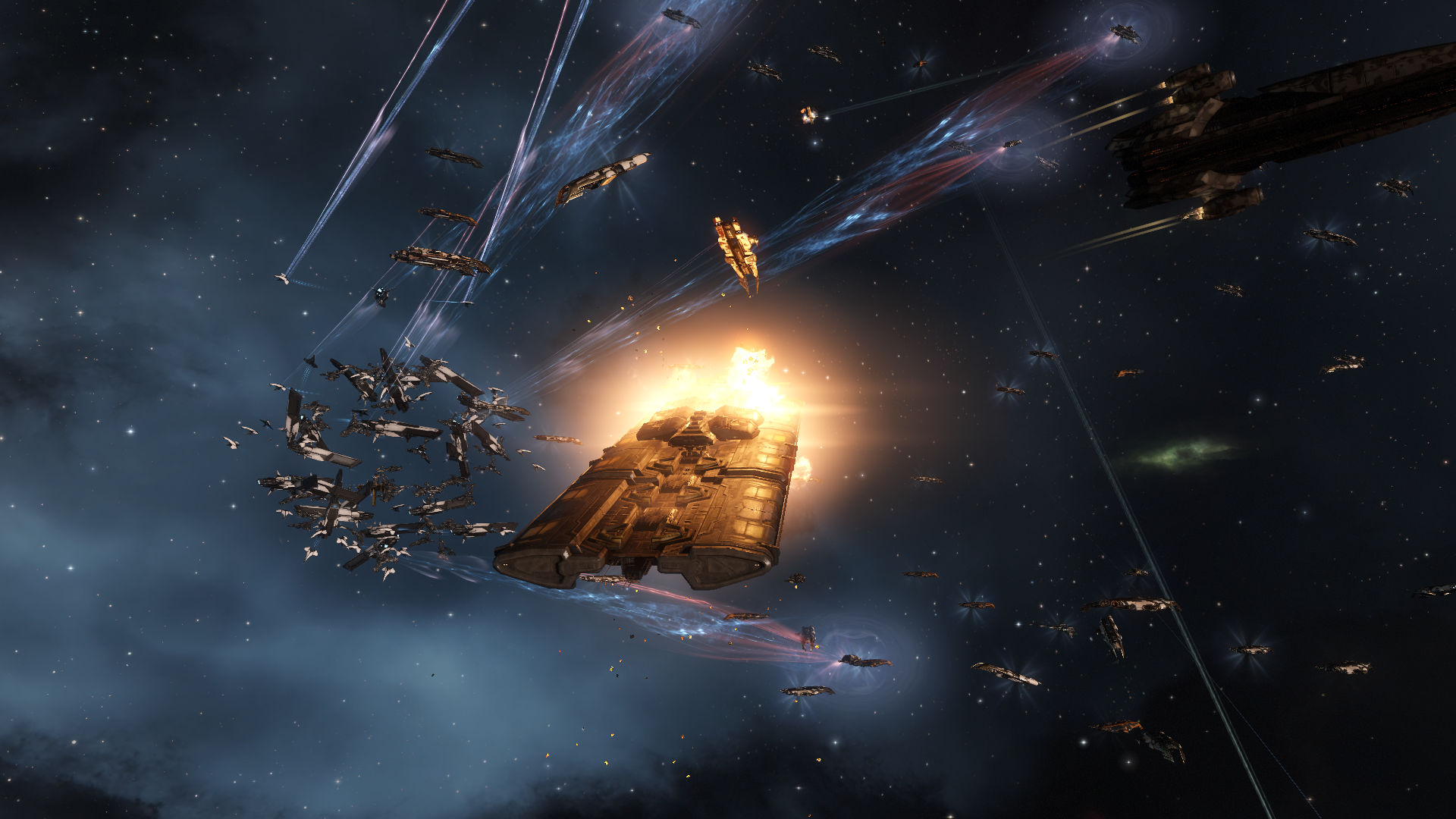 The last moments of a burning Orca
Image by Whisper Quietly

The outliers fielding out of place ships for wanton destruction

During the 'Burn Jita' mayhem, there were a few capsuleers & ships that stood out in their ganking operations.
Either they were the only ones fielding the ship, or the ships they fielded were very expensive, making it more a showcase of their financial wealth if they could use such high value ships so carelessly.
Below a short list of the outliers I was able to spot, along with a short explanation:

- Terathree Hanaya: Stood out during 'Burn Jita' by his repeat use of the Oracle attack battlecruiser. While this ship has powerful offensive weaponry, the attack battlecruiser of choice during this operation was the above-mentioned Talos.
Yet, this capsuleer preferred the Oracle & knew how to field it as he topped the damage list of many killmails with it. This was surely helped by the usage of tech 2 modules, giving it a powerful offensive boost.

- Emissio Lacrimare: This capsuleer was reported to field an expensive Vindicator battleship to blow up a Fenrir freighter. The usage of such ship goes beyond simple ganking and is more a statement.
The statement being that Goonswarm has money to burn & isn't afraid of throwing away expensive equipment & ships for their operations.

- Jay Amazingness: He took it up a notch by sacrificing a Barghest first to destroy an Orca hauler and then a Machariel to blow up a Charon freighter in the massacre that was 'Burn Jita'.
Clearly, they got money to burn if they can do this! Not to mention that it is a display of their wealth and a warning to their foes, showcasing that they can use ships like this in a suicide manner & not feel it in their wallet.

-Aryth: This man operates on a whole different league then the above mentioned capsuleers. Why is that? Because this man solely used Vindicator battleships during 'Burn Jita'! Yes, this man fulfills the stereotype of the wickedly wealthy and evil capsuleer, throwing away lives & wealth simply because he can.
At least a dozen of his Vindicator battleships were destroyed by CONCORD as he wrecked freighter after freighter with these ships, along with his allies.
Yet to be able to do that is a display of both the enormous wealth this man possesses and his total disregard for human life, not only for his targets, but also his own crew. A true capsuleer, fitting the stereotype of the dark demi-gods, wielding the wealth of nations for their personal pleasure. 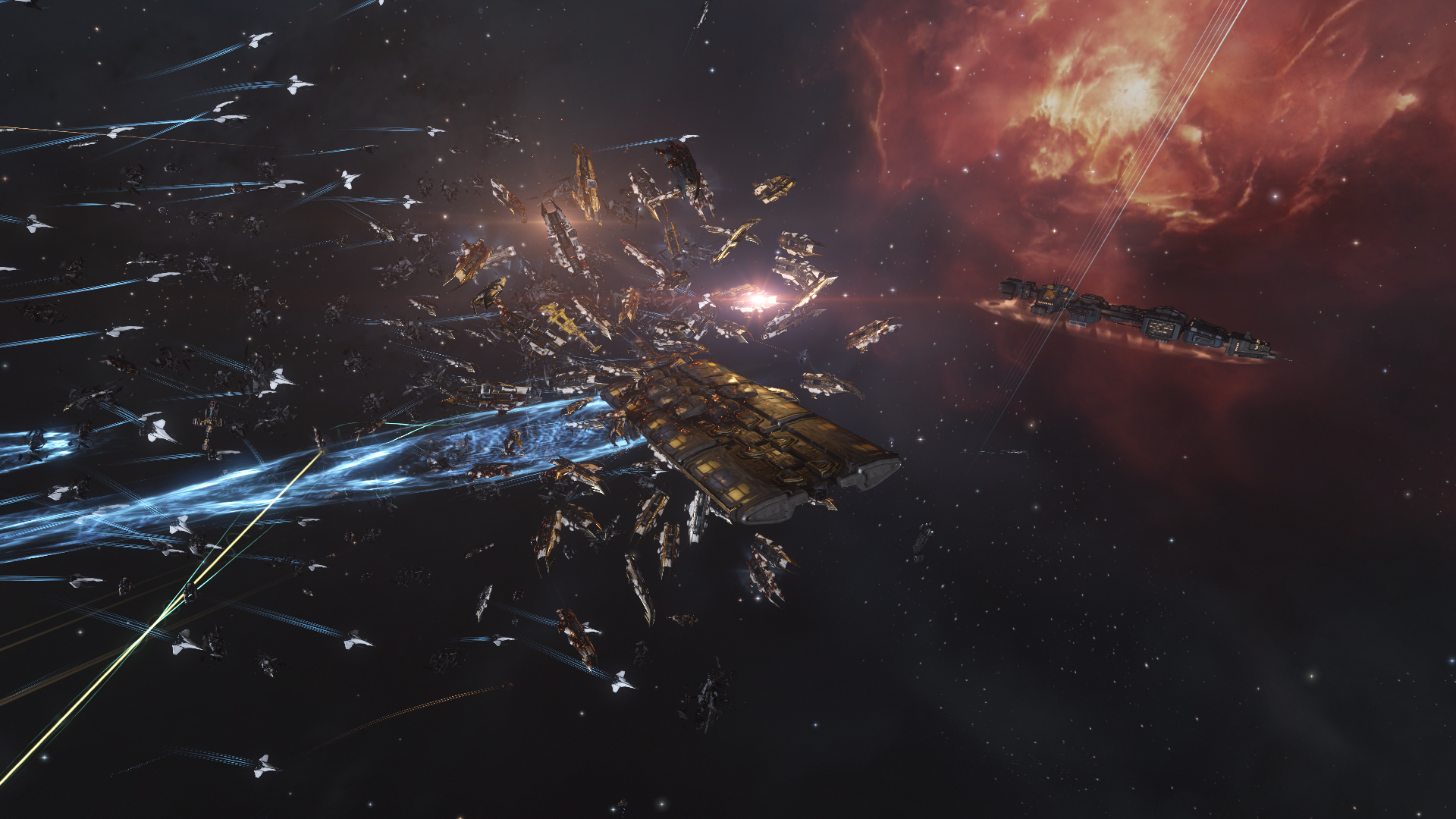 A Mammoth hauler is desperately trying to warp out, while the Orca is less lucky, succumbing to a 'Burn Jita' fleet with a CONCORD fleet on their tail.
Image by Whisper Quietly

While this whole 'Burn Jita' operation caused destruction on a large scale, with losses running into trillions, the Jita market recovered rather fast.
The main reason for this is the huge trade volume, Jita alone outmatches the entire cluster combined in trade, hence putting a lasting dent in it is extremely hard.

Yet, 'Burn Jita' did dent the trading for a few days, showcasing how massive this operation was. To add to this scale, over 50.000 Coercers were used to wreck havoc in Jita and the surrounding tradelane systems.
CONCORD penalty system was unable to control such agressive large scale capsuleer activity, as it is based on penalizing security status & bringing retribution on offenders. This bears stressing: CONCORD does not protect you, CONCORD punishes your attacker if he had an unjust cause.
Above is also why anti-ganking is hard, as CONCORD will intervene if you shoot a ganker before he fired (unless his security status is low enough)
Yet some still went out & did their best, most notably among them was the SPECTRE community, who leaves no opportunity to wreck other capsuleers untouched.
Pandemic Legion also operated a small but effective anti-gank force in the Jita system.
However it is hard to determine how effective it was in protecting the haulers due to how CONCORD law operates. 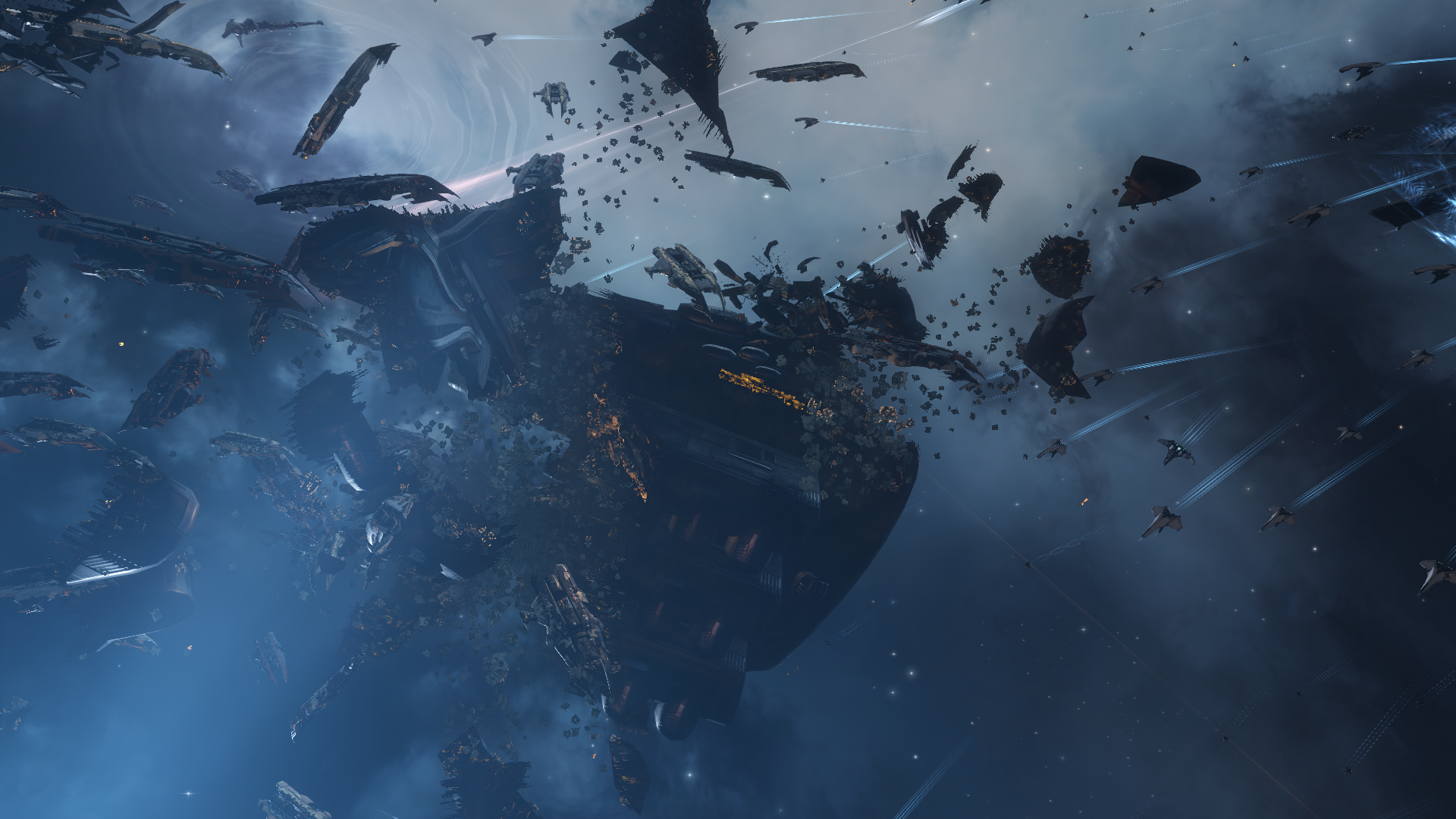 The wreckage of an Obelisk slowly drifting through space as CONCORD rushes in to penalize this breach of law. But yet again, too late to save the freighter.
Image by Whisper Quietly

Some extra info regarding this destructive event can be found below:

- Imperium News announces 'Burn Jita 5': Letting New Eden know the Circus of Chaos is back in town, along with some remarkable first day kills on clueless freighter pilots.

- Burn Jita 5: The less-travelled path: A report of one of the smaller offshoot fleets participating in the 'Burn Jita' operation; fielding Trasher destroyers & hunting smaller targets with it.

- Burn Jita 5 aftermath: After action report, giving an insight on the organisation required to pull this destruction off on such a grand scale.
Posted by Jandice Ymladris at 23:23