The Glitter and Gloom party at L'Amore

The Glitter and Gloom celebration is a costumed party hosted by capsuleer Lasairiona Raske, allowing capsuleers with widely different backgrounds to mingle in an enjoyable setting, away from our usual comm channels.
The L'Amore venue itself is located in the Kasrasi system, at the Trust Partners trade post.

To add to this, prizes would also be handed out to the most creative designs, making sure there would always be something to talk about, assuring that socializing with others would be easy & that there would always be something or someone to talk about!
The prizes themselves were kindly donated by the ARC capsuleer organisation, with an extra isk prize for the main winner, donated by capsuleer Nomistrav

The 3 prize Eros ship skins, fitting for the L'Amore establishment, provided by ARC

You can read the announcement made by Lasairiona Raske here: Glitter and Gloom costumed party at L'Amore
The notion of 'no nudity, including no bodypaint or loincloth' might sound silly to the average person, but I assure you, the addition of this rule is a necessity when dealing with capsuleers...
Do note that due to the often troublesome reputation of capsuleers, Miss Raske not only hired top of the line discrete security, but also held the last word on attendance, barring troublesome capsuleers from participating when required.
This was to assure minimal disruption at the event itself and to make sure everyone would have a good time.

The Glitter and Gloom party

The costumed party itself was a major success, not only did the place itself fit the theme, even the drinks joined the Glitter and Gloom theme!
Many capsuleers attended the event, each of them adhering to the theme. Some worn brilliant white glittering dresses, others went for a more gloomy approach and the bravest of them combined the two parts of the theme in one brilliant costumed dress! Not to mention the sounds & light effects on some of these truly wonderful costumes!
One popular sub-theme for the gloom approach were the Drifters, due to their designs fitting it so well.

Capsuleers had a good time, chatting & talking about past events and getting to know each other better beyond the limits of the comm-channels. The buffet & themed drinks were a big hit as well, as many tied them out & enjoyed it.
The various often extravagant outfits served as an excellent opening to get to socialize with others, giving people common themes to discuss.

The costumes itself were beautifully designed and served to elevate the enjoyment of the event, with many capsuleers going all out on their designs. Not to mentioned the classic on these costumed parties, the guy/gal entering the venue with a costume shining so brilliant that sunglasses or other light-dampening equipment was needed simply to look at it.
At this party, our brilliant party sun was capsuleer Che Biko wearing a nanoLED suit on full bright setting. And this is why I always carry sunglasses when attending these costumed parties!

As the evening progressed, it became time for the costume competition prizes. The first 3 prizes would be handed out by popular vote, with a 4th prize handed out by the host of the evening, Lady Lasairiona Raske herself.
To assure a fair competition, voting was anonymous & a list of the competitors was published, so people could admire these outfits & costumes in more detail. Do note that due to the creative designs & wonderful effects by many, it was hard to vote for just one, but choose we all had to! A hard task I assure you. 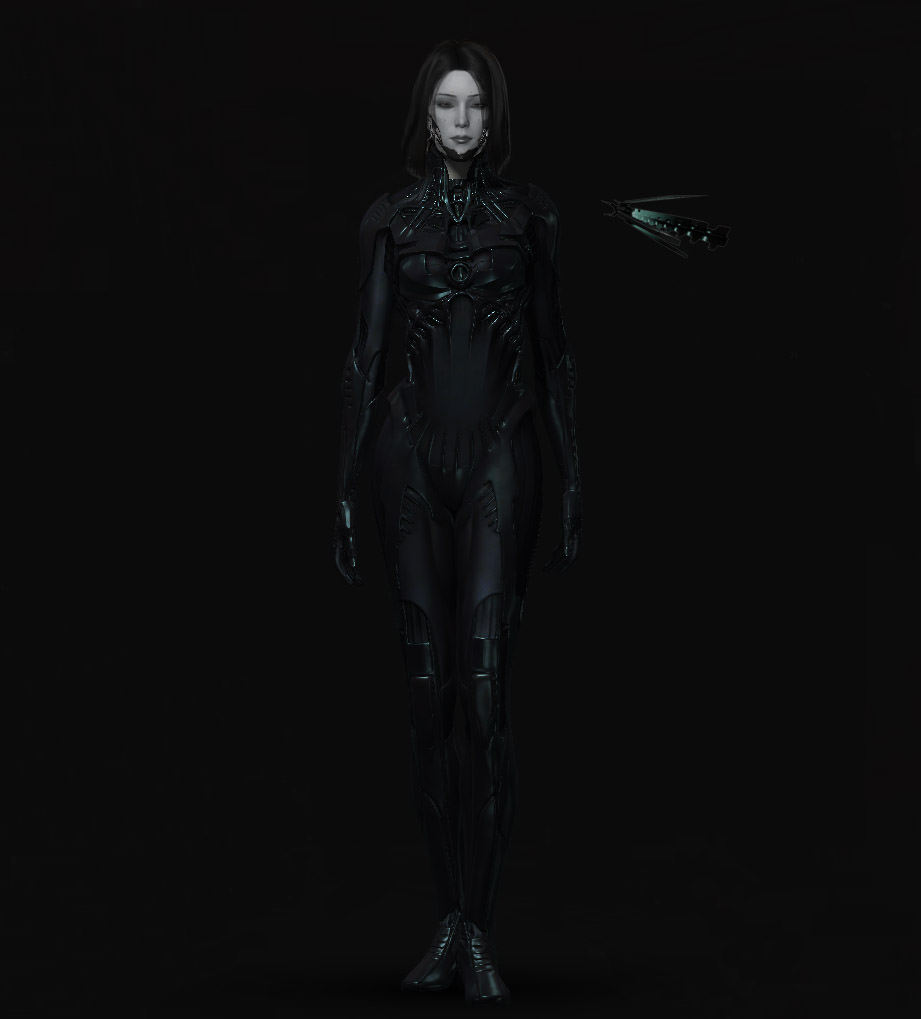 The Drifter-themed outfit worn by Mizhir

The Glitter and Gloom prize winners

Once the admiring & comparing of the amazing outfits was done & the voting over, it was time to announce the prize winners!
Announced by Lasairiona Raske on stage, these were the winners:

Second place; Hespyr Abenai, who combined both themes into one brilliant outfit, wearing a silvery grey glittering dress over her vantablack modified skin, with a halo-like glow effect for her hair, making her one great eye-catcher!
Her prize was: 100 million isk + A Cynabal cruiser with accompanying Eros skin + 1000 Eros firework charges

First place: Mizhir, with her amazing Drifter outfit. One could easily mistake her for a true Tyrannos pilot at first glance!
She won the main prize, consisting of: 200 million isk + a Machariel battleship with the appropriate Eros skin + 1500 Eros firework changes.

Handed out last was the host prize of 50 million isk, awarded to Aria Jenneth, for her marvelous outfit, changing colours depending on the light. From a matte black in low light to a beautiful subtle spectacle of colours under bright light as it's made out of thousands of rainbow obsidian beads to create this effect.

After each announcement, the crowd broke out in applause, celebrating the winners. But as said, the competition was tough and many had stellar outfits, but alas only 4 could win a prize in this close contest

All in all, I had a great time at the event & enjoyed getting in touch with several capsuleers. Not to mention getting to know some of the new faces that appeared on the IGS scene during my absence in the capsuleer community.
Also a major thanks to Lasairiona Raske for hosting this beautiful event, with a discrete but efficient security, preventing any major issues and showcasing one can have a good time without someone disrupting the event.
The attending capsuleers contributed to the success as they all joined the theme, sometimes with very extravagant designs but all of them wonderfully made!

A big thanks once again to the host & attending capsuleers for making this an enjoyable & successful event!
Posted by Jandice Ymladris at 12:08