Strange structures and mysterious Sleepers appear all over New Eden!

As one can notice from the busy chatter across the comm-channels, large structures have appeared all across New Eden, their function or purpose unknown. Along with this, strange new Sleeper ships appeared in force, looking for something!
Immediately, capsuleers went to work, doing their best to find out more about these strangers appearing seemingly overnight! Thanks to their efforts, a few things have already been discovered.

So far, very little has been found out, as it's extremely hard to make out the shape of this installation, let alone find out it's purpose. However, these structures have been found all over New Eden! Whether their cloaking systems are beginning to fail simultaneously due to interference with Caroline's Star or have manifested themselves through some other means is so far not yet known.
However, the first observations indicate the structure is truly massive in scale, dwarfing space-ships that fly next to it! 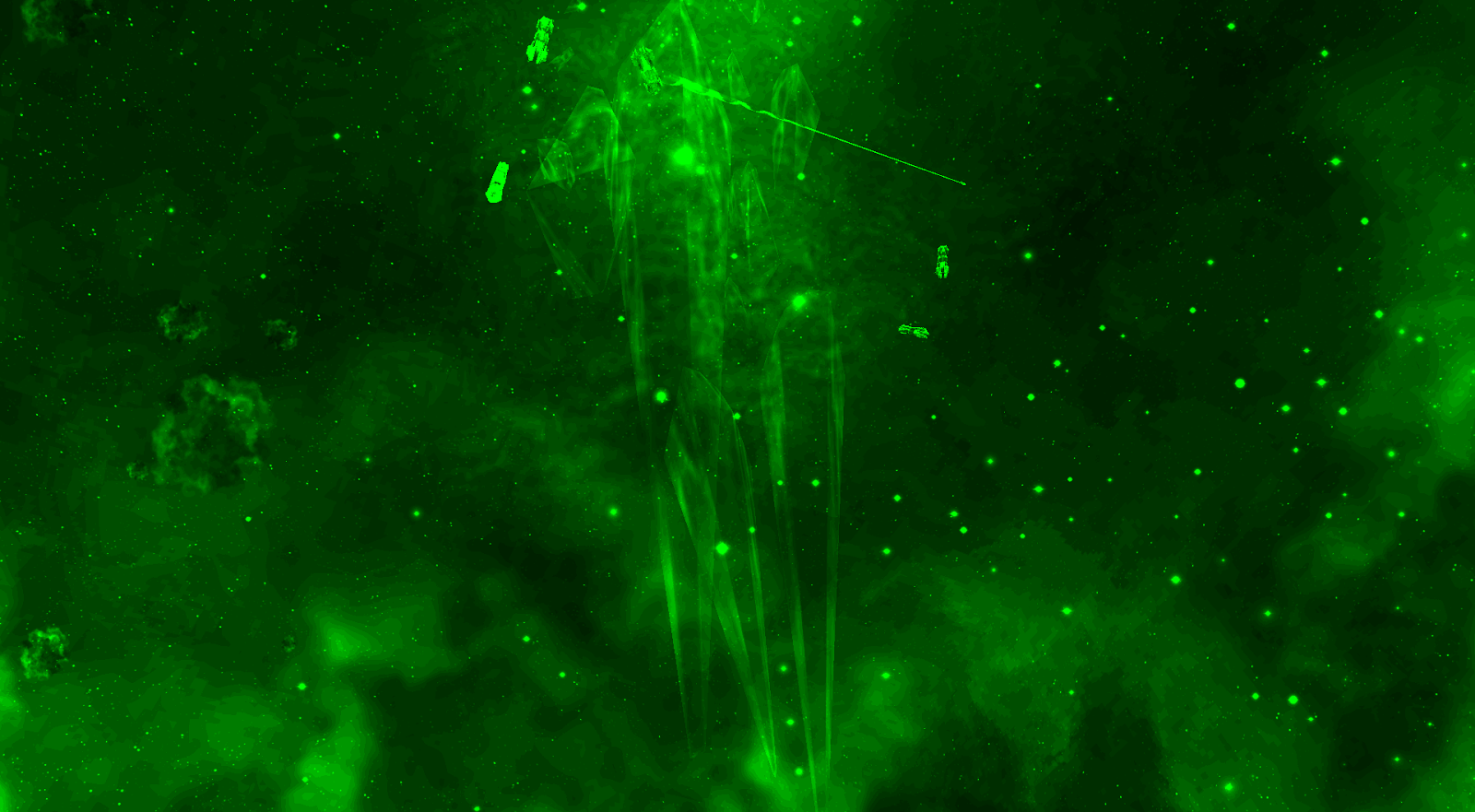 The crystal structure revealed, notice how small the Megathrons are compared to the installation!
Image by Rain6637

The Goonswarm Federation members did some heavy research into these installations and discovered some additional info about their shape (Images released for the public). They also uncovered that these structures are impervious to any known weapons and do not react on any form of interaction outside being able to target it.
Based on the research performed by others, a rudimentary model could be created, showcasing the strange crystal-like structure: Crystal Station. More research will be needed to unveil their purpose & function. Considering how numerous these installations are, it is only a matter of time that we'll find out more about them!
However, systems harbouring these structures also reported groups of strange sleeper ships flying on & off, indicating that the appearance of these structures and the arrival of these mysterious sleepers are related!
Eve travel did a great overview on these strange occurrences as well! Check the article 'Unidentified structures' for more info regarding them!

Along with the strange crystal structures, a new kind of Sleeper ships appeared. When targeted, the database refers to them as 'Circadian Seekers'. Digging deeper into the name, Circadian refers to biological processes that occur regularly at 24 hour intervals, even with absence of outside stimuli (like day/night) It's also referred to as the biological clock
Now the oddness is, why use a biological reference to identify a machine like the newly uncovered Sleeper Drones? Is there more behind their intelligence then mere digital code inputs? So far, not much progress has been made into understanding what drives the Seeker Ships.

Seekers scanning the various structures at Site One, Eram System, Image by Okst666

So far, they've been scanning stations, ships, and various other structures with their white beams. Among those sites, they took an interest on Arek'Jaalan's Site One as well (Images provided by Okst666) What they are looking for is unknown, perhaps certain cargo? Or collecting info through scanning these objects? Whatever they are doing, they don't seem to act aggressively, merely warping & scanning things, but no hostile actions.
True to their nature, various capsuleers already shot them, destroying several in the process. Their wreckage hasn't left any clues, except that they leave similar salvage as the Sleeper Drones in wormhole space. Curious to note is that these sleepers don't fight back so far and just let themselves be destroyed, a very different approach then their violent brethren in Wormhole space that defend Sleeper sites fiercely.

Close up of a Circadian Seeker, image by Feu dAstres

Currently, main focus should go out to find out what they are scanning for; items? data? Also, additional investigation is advised in determining if the sleepers are friendly or not. Considering how we've been ravaging their space, they've let us off light so far. But this might change in the future... a dreadful thought considering their advanced technologies...
Capsuleer Feu dAstres conducted a close-up visual scan of them, you can see the results in his image-gallery: Circadian Seekers
Recently, Scope News has reported on these events as well through their channel: The Scope; Shattered worlds
Posted by Jandice Ymladris at 13:00