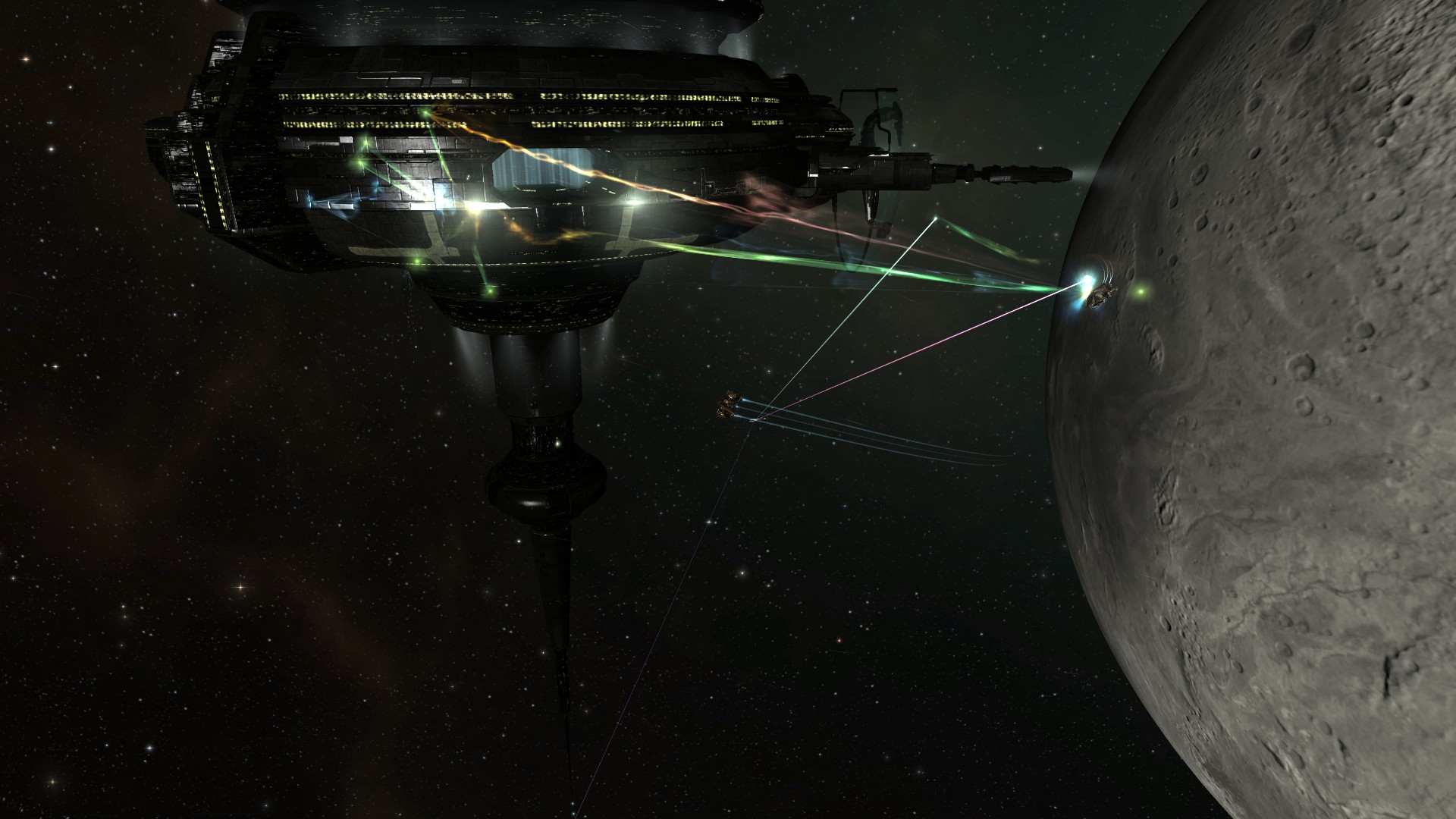 As time passed by, people arrived at the Luminaire Navy station to once again celebrate the start of the holidays in New Eden! Organized once again by Commander A9, the official start time would be 21H, but quite some folks arrived before that time, starting the firework show early!
With all the banter in local, folks wondered what was going on, but once they knew what it was for, many joined the fray with their festival launchers! Fireworks & snowballs got tossed left & right, lighting up many a ship! 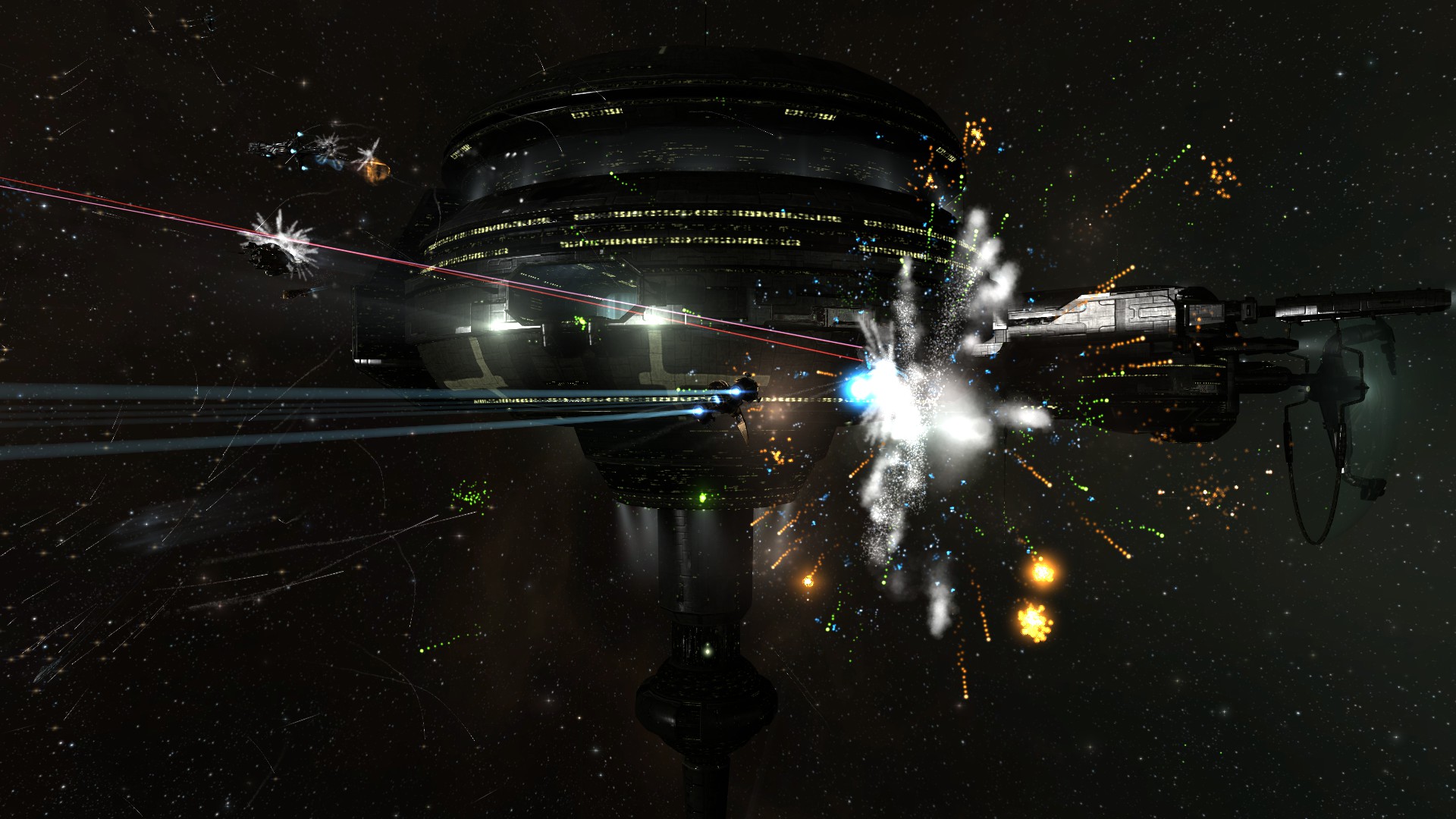 As time passed, the crowd grew, having alot of fun with all the fireworks & snowballs being flung around. The dazzling performances by various fast frigates added to the enjoyment of many. So by the time the event started officially, people were in the mood, with many more coming over as they heard of this fun firework shooting!

And so we're go for a whole evening of fun! From randomly pelting your fellow capsuleers with snowballs to professional firework teams dazzling the audience! Not to mention the many frigates trailing impressive missile-storms behind them, or the various holiday handouts by capsuleers!
And all this performed with New Eden Radio as the soundtrack of the event, as DJ Tranze & DJ Dagaroth made sure they picked excellent music for the audience to enjoy!
And for those folks who feared to run out of fireworks or snowballs, Commander A9 had them covered, thanks to generous donations by various groups across New Eden! For those who didn't had access to a party-ship, James Baboli surprised them with a Party-Talwar for leasing! This way, nobody had to miss out on all the fun!
Much hilarity was had when one of the attending capsuleers revealed he was supposed to be in the hospital, but managed to convince the nurses to let him attend, he only had to bring them along!

But what was all planned for this event? Lots of things, as the list below shows! 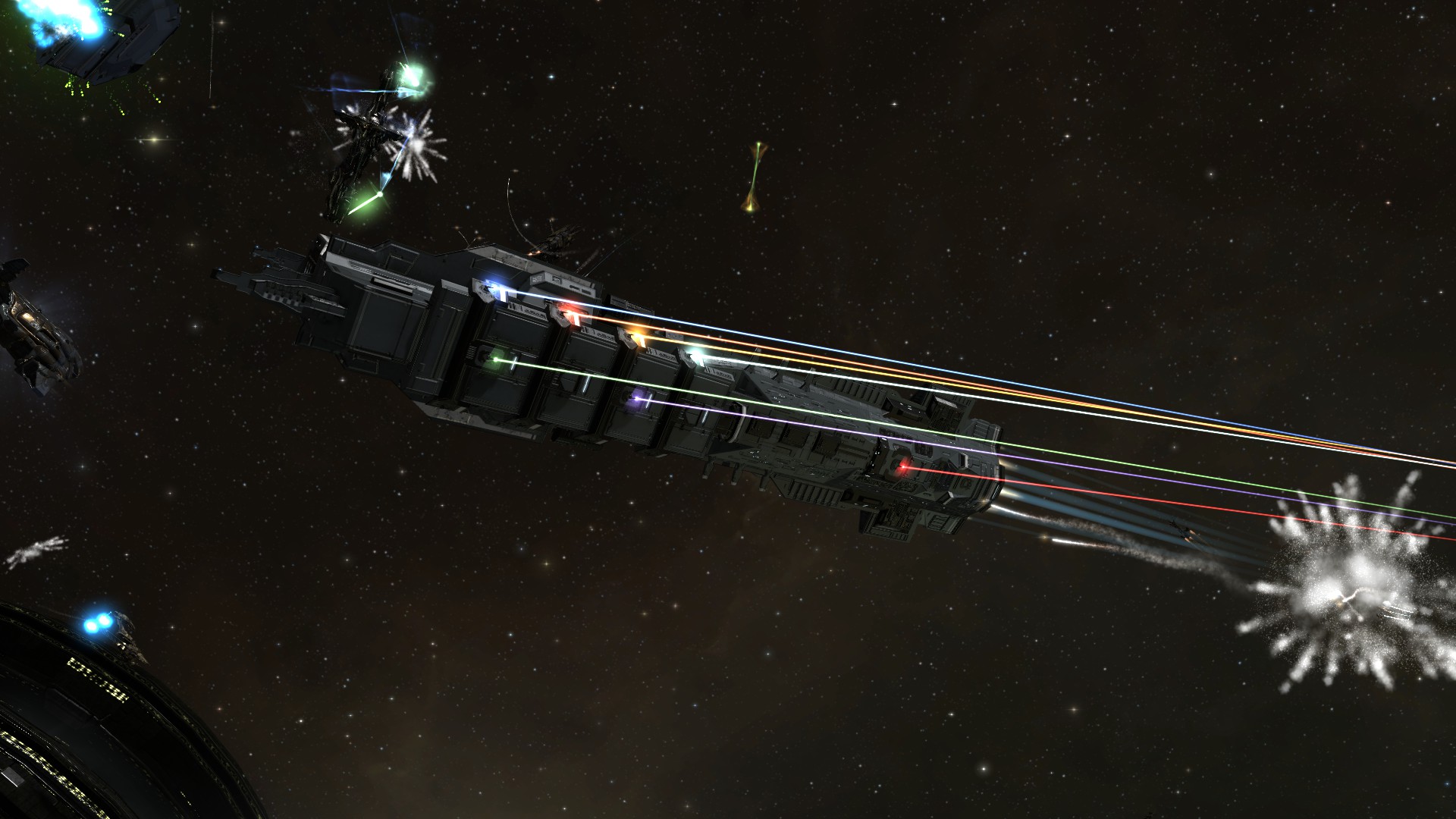 The DiscoRokh! Performing lasershows all evening! Image by Charles Surge

The Lightshows! Impressive displays for all to see!

The height of the evening are the wonderful Lightshows. But this year, competition was much more professional & dedicated then last year ( The Luminaire Holiday Festival was a great success! ) While last year had some great displays, they were blown out the water by what could be seen this year! The Lightshows had several teams working together in creating displays that were stunningly beautiful!

The four lightshows were all marvels of pyrotechnics & snowball tossing art. Thanks to the great donations of many, much more prizes could be handed out this year! The top 4 of every lightshow would win a prize, but even then it was often hard to pick winning entries due to the high quality of the performers!

But in the end, winners were picked, receiving a large variety of prizes, from a Quafe Edition Megathron to Fun Holiday packages!

As you can see lots of variety in the prizes, not to mention some humour too! Not to mention that the shows given by the contestants were often of a dazzling & spectacular beauty! No image or video can do justice to these shows, the only way to enjoy them fully is to be there!
But with the many upcoming holiday events, you'll have a chance to see some of these stellar people & teams in action! But the Luminaire Snowball Festival was more then just the lightshows, as people had great fun & did their own things at the Luminaire Navy Station undock!

Holiday Cheer for everyone! Capsuleer style! 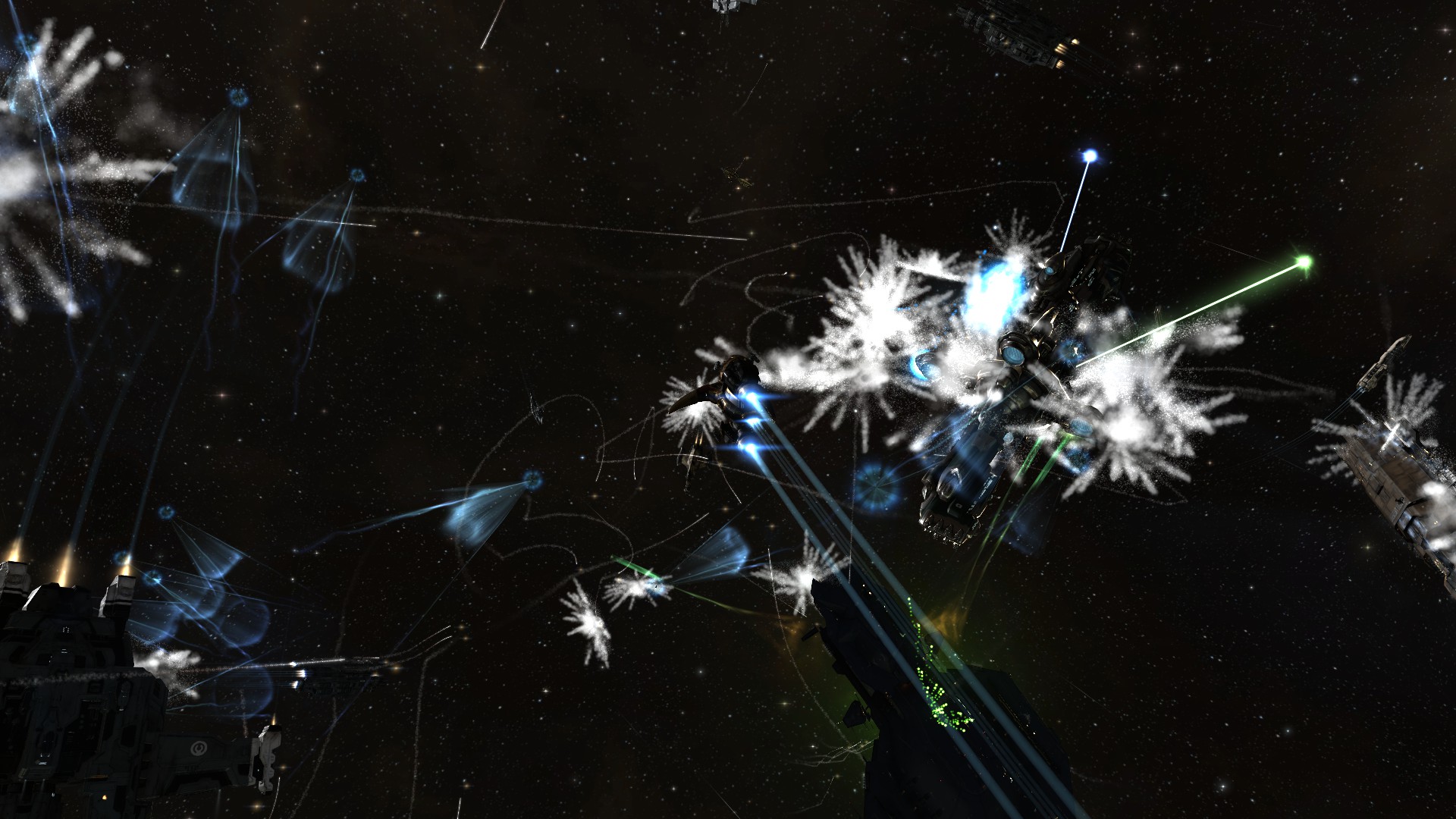 Bring on the snowball fights! Image by Charles Surge

As the evening progressed, people had fun shooting each other with fireworks & snowballs and handing out random gifts in blue cans. But shortly after the first lightshow, something went amiss. A whole lot of yellow cans were dropped, containing some very shiny blueprints, from Rorquals to Thanatos blueprints and even some tech II copies!
At first most people waited anxiously for the owner to release them as blue cans, but in the end, the desire grew to much and some started looting the cans! Virion Stoneshard retaliated immediately on these greedy capsuleers & punished them by blowing up their ship! A few more tried, but underwent the same fate! But at long last, the cans were released for the public and vanished in record-time, looted by the swarm of waiting capsuleers!
The turmoil did gained the attention of Concord, who came peeking with a lone Concord Police Commander battleship, who remained there for the rest of the evening, keeping the peace.

But being in a sportsmanship mood, Virion Stoneshard wanted to create a unique firework display, that everyone could enjoy! So he turned himself suspect and invited anyone who wanted to fire at him, creating a blinding explosion for all to see as his Typhoon got barraged by a few brave party-goers!

You are primary! Start running or get smothered under a barrage of fireworks & snowballs!
Image by Jaantrag

All along the evening, people often called a random capsuleer as primary for their fireworks & snowballs, usually ones with fast ships! This resulted in the famed Missile swarms appearing, giant clouds of firework missiles & snowballs chasing a fast frigate! A wonderful sight to behold, all those missiles chasing a lone ship.
And when they hit, it would create a massive & blinding explosion of fireworks & snow!
During these callouts, much fun was had by all, as people pelted each other with snowballs and launched fireworks in brilliant colorful blasts!

The Secret Santa handout was also a source of fun & cheer, as people received a ton of random gifts, from silly & goofy to shiny. Faction modules got handed out, sets of Large weapons, ships and festival packages! All in all, people enjoyed their random gifts! Some put them immediately to use as it fitted the Festival theme!

The many lightshows were also a source of entertainment, but of a different kind, as most folks had to hold back while the contestants showed off their skills in creating marvelous snowball & firework displays! This controlled method allowed the audience to fully enjoy some of the most beautiful & intense fireworks as some contestants worked in teams to deliver their best shows!

The fourth lightshow saw some panic & disturbance when a large fleet of Drakes suddenly warped in! Immediatly, the core group who assisted the organizers went into alert modus, investigating any possible threats & alerting caution against these strange newcomers.
Luckily, there was no need to worry, as the Drake Swarm turned out to be friendly, being a late joiner to the party.
As the Drake Swarm accompanied the Lightshow teams to the party-location at the Luminaire Navy Station, people were amazed at the sight of this large Drake fleet! people flew around them, pelted them with snowballs & tossed fireworks on them, lighting up the whole place!

A last word on this enjoyable holiday Snowball fight

All in all, it was great fun! Everyone enjoyed themselves shooting fireworks & snowballs and creating neat shows with their lasers & drones. Nobody had to miss out as Commander A9 & James Baboli made sure everyone had snowballs, fireworks and a ship to launch them from!

The lightshow events were also great, showing a formidable growth compared to last year's event. They were much more professional and team-based, not to mention alot more contestants as well! The show displays themselves amazing to see, but sadly you can't catch the feel & beauty well in still images. Video's give a better view, but it doesn't compare to seeing them yourself!
All in all, very high quality contest with impressive visuals!

This year did had a more rowdy section, where people shot each other in good spirits, leading to a few losses (but all in good nature). Luminaire Battle report shows what ships went lost. Check 21 December to see who got involved in fights on the Luminaire Snowball fights!

The arrival of the Drake fleet was an impressive sight and a great way to close the event on. Lots of people had fun with them, making the fleet their focal point for their lightshows, fireworks & snowballs.

Also, several folks made great images of the event. It also got recorded, but as recordings need editing before release, they'll be revealed later! Below, you'll find links to their galleries, along with an example-image! 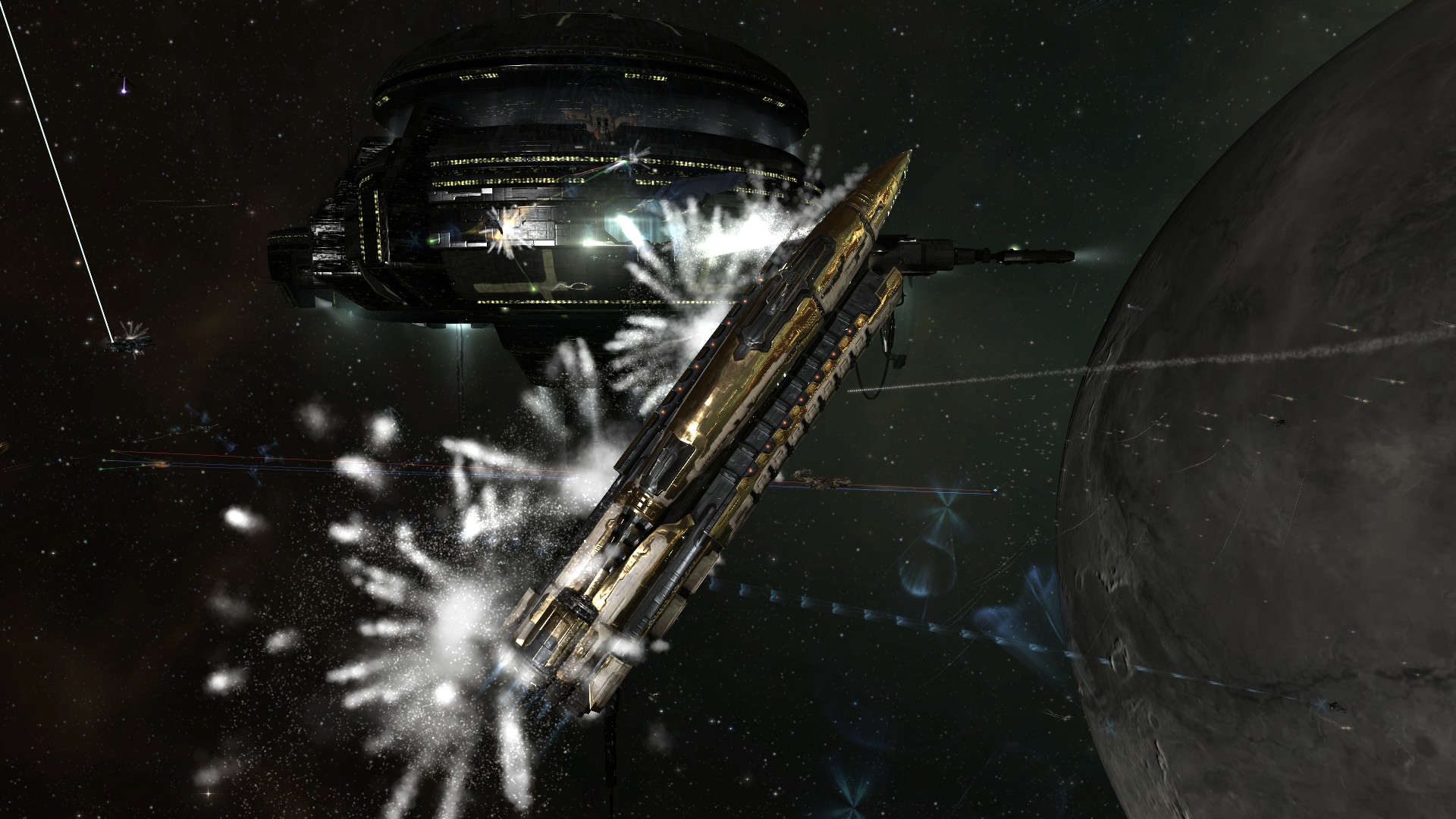 If you want to know more about the first Snowball Fight Festival in Luminaire last year, you can read about it here: 'The Luminaire Holiday Festival was a great success!'

As a last note: a major thanks to all who donated to make this event a greater success! You can find the list of donators here: Luminaire Snowball Fight 2
Posted by Jandice Ymladris at 22:31